Salute to the Rabbi

Much excitement during this past week, as anyone with even a remote Scottish connection marked the 250th anniversary of the birth of Scotland's bard, the great Robert "Rabbie" Burns. 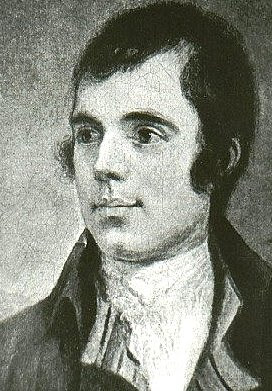 Born 25th January 1759, the eldest of seven children in an Ayrshire farming family, Burns enjoyed no financial privilege, but did benefit from an extensive - though sporadic and unconventional - education.
They took their education and their language seriously in the Ayrshire of old. I remember, as a boy, going to the county to visit my Great Uncle Eddie, who had been the schoolteacher in the little village of Auchentiber and had been allowed to carry on living in the tumbledown old schoolhouse when he retired and the local authority closed all the village schools. My family didn't own a car, so the journey to visit Uncle Eddie was a long one, involving several changes of bus and a long walk to the village. This would be around 1970, when Eddie was in his 90s. At the end of our visit, he would insist on accompanying my mother and me on the trek back to the bus stop. The elegant formality of his language has always remained in my memory: "I shall walk with you to the village, where you may obtain a conveyance.". It was a lovely echo of a bygone world.
But I digress. (And old Uncle Eddie would have scolded me for starting a sentence with "But") (And "and", come to that!)
Back to Burns. What a writer. We celebrated Burns Night with a haggis, introduced with the traditional address: "Fair fa' yer honest, sonsie face, great Chieftain o' the puddin' race..." and musical accompaniment. By tradition, a piper should escort the haggis into the room. We couldn't rise to an actual piper, but we did have a Practice Chanter (that's the bit of the bagpipes on which you play the tune) played by Ken, my ex-Brother-in-Law. He did very well, considering he never fully learned to play, and whatever tuition he had was at least 20 years ago! I spent some time trying to learn the bagpipes back in the 70s, but my efforts were outlawed under the Geneva Convention. Undeterred, I would have accompanied Ken on my own Chanter, had it not been for the mysterious disappearance of the mouthpiece (I think the cat's pinched it. Or possibly a local music-lover.), so I was forced to contribute an unforgettable rendition of Scotland the Brave on the best substitute I could find: the Swannee Whistle.
Aside from the splendid Address to the Haggis, Burns penned many fine songs and poems, before departing this world at the age of just 37. In my view, there's none finer than his thoughts on having accidentally destroyed a mouse's nest, while ploughing a field. The emotion and kindness of To a Mouse always brings a tear to my eye.
The verse "I'm truly sorry man's dominion Has broken Nature's social union, And justifies that ill opinion, Which makes thee startle At me, thy poor, earth-born companion and fellow mortal!" is just a beauty of construction.
The same poem gave us a phrase that's still in common usage today. When something's gone wrong, people shake their heads and mutter about "the best laid plans of mice and men", but do they remember the source, or the complete line? It's from the penultimate verse of To a Mouse. "The best-laid schemes o mice an' men Gang aft agley", Burns writes (gang aft agley = often go awry). I suppose the modern equivalent might well be "Shit happens" but I'd vote for Burns' choice of vocabulary any time.
Rounding off this remarkable poem, he addresses the mouse thus: "Still thou art blest, compar'd wi me! The present only toucheth thee: But och! I backward cast my e'e, On prospects drear! And forward, tho I canna see, I guess an fear!". Burns wrote of his fears for uncertain, but probably bleak, future prospects more than 200 years ago. Here in 2009, I find he's still bang on the money.
Posted by Charles Nove at 07:17