Well, dear reader, you find me all at sea, on another TOGS’ Voyage. Just a quick explanation for the uninitiated: the TOGS are the hardcore followers of Terry Wogan and his now defunct Radio 2 breakfast show. The show may have gone but, happily, the TOGS and their fun, games and splendid charity work live on. Over 300 of these good folk have booked on Cunard’s Queen Victoria, for a cruise entitled ‘Jewels of the Mediterranean’. (So, where it’s going is anyone’s guess!) And they’ve had the good grace to invite a bunch of us jolly broadcasters along to share the merriment. 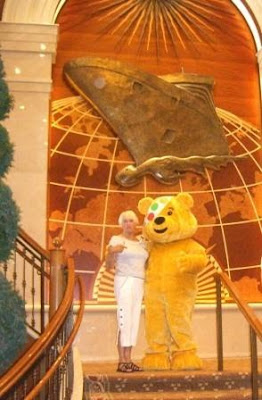 And as you can see, Children in Need mascot Pudsey Bear is with us too.

We set sail from Southampton at teatime on Friday, the huge ship making her way carefully down Southampton Water, past the Isle of Wight, and out into the English Channel. We celebrated our departure with champagne at the stern of the ship, and then a champagne reception to welcome our TOGS friends. Here’s me, waxing lyrical – or is it whimsical? - at the evening bash. 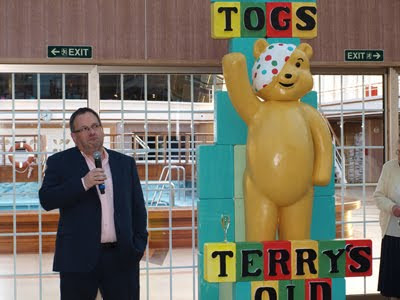 In the course of Saturday, we traversed the notorious Bay of Biscay. It’s vast! Bigger than it looks on the map. It offered up a bit of a swell, too, but it takes a lot to interfere with the smooth running of a ship this size.

Saturday morning, in the Grand Theatre (and grand it certainly is, a well equipped 850-seater which would not look at all inferior in London’s West End.) the entertainment bill offered A Natter With Nove, in which, with the excellent interviewing assistance of the lovely Reverend Ruth Scott (of Pause for Thought fame) the assembled ladies and gentlemen were treated to the story of my life and haphazard career. We followed that with Uncle Charles’s Newsreading Challenge, in which a number of brave volunteers were dragged to the stage to have a go at some News bulletins, of the style we do on Radio 2. They did very well, and were pretty brave to get up there and give it a try in front of their fellow passengers.

More champagne followed (are you detecting a theme here?) interspersed with a sprinkling of G&T. I’m writing this having come in from sunning myself on deck, with a glass of Pimms and an ice cream. It’s hell, I tell you. 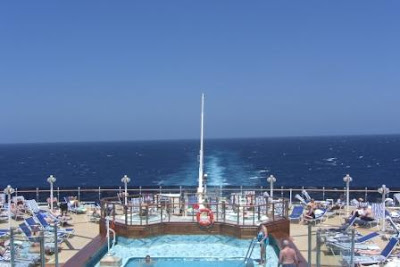 One of the party travelling with us is a lovely Spanish lady, Christina. She was a little puzzled by the concept of the TOGS’ names. They tend to have an alias that they use for activities connected with the show, and most of the names are a play on words of some sort or another. Names such as Eileen Dover, Dora Jarr, or the retired military genius Major Sir Gerry Pending, are par for the course. Anyway, one of my on-stage Newsreading participants was the delightful Norma Stitz. Even with the top-class grasp of English possessed by our Spanish friend, this idiomatic usage was a bit baffling. And so it came to pass that Janet, wife of my friend and colleague John Marsh, set to explaining some of these names and how the puns worked. She worked gamely around the idea of Norma’s tag. There was a small pause and then the penny dropped and, grinning broadly, Christina announced, loudly, in her Malaga accent: “AH! ENORMOUS TITS!”. Fortunately, the band was playing cheery melodies for the Black & White Ball at the time, otherwise the ladies walking past at the time might have been taken aback at this observation.

First stop, after 3 days at sea, is Barcelona, where I am due to take my leave, flying back to London so that my colleague Alan Dedicoat can come out to join the ship. Then I’m due to return to rejoin my shipmates in Rome on Friday. If you take out of the equation the British Airways cabin crew strike and the Icelandic volcano, it should all be smooth as silk………
Posted by Charles Nove at 17:52