A cracking start to the weekend, with a grand adventure in Leicester, where I had the pleasure of joining The Togs at their annual Convention. For the uninitiated, I should explain that The Togs are the hardest of hardcore followers of Sir Terry Wogan's Radio 2 breakfast show. They have a whole community of their own, full of colourful characters with improbable names such as Luke Warm, Payne N Diaz and Edina Cloud. Hearts of gold, these folks - their charitable efforts raise huge amounts of money every year for the BBC Children in Need charity. The Convention provides a great excuse for a bit of a knees-up, and The Togs are kind enough to invite us Radio 2 folks to come along and share the fun.
Here we are, launching the 2009 Togs Celebrity Calendar

with, from left to right, "Pause for Thought" regulars Canon Roger Royle, Cpt Charles King of the Sally Army, Rabbi Pete Tobias and Rev Rob Gillion. Then Alan Dedicoat, me, Radio 2 Producer Alan Boyd, Sir Terry Wogan and John "Boggy" Marsh.
Onward into the evening, and the eagerly awaited Fancy Dress Competition with, of course, an expert panel of judges. Ours was a gruelling task, so I'm sure you'll understand that the glasses on the table are there for purely medicinal purposes.... 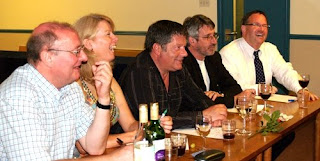 The eventual winners? The Crinklies with their remarkable portrayal of Intrepid Explorer and Colourful Bug. This is the sort of thing that keeps Britain Great! 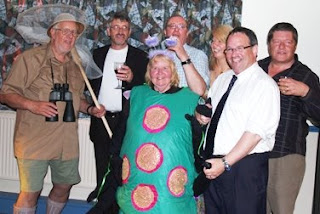 Togs, I salute you! And thanks to Hellen Bach for the pictures.
The Togs Celebrity Calendar, in aid of a very worthy cause, can be purchased from:
www.togscalendar.org and there's more Children in Need stuff on offer at: www.charitygoods.com