Sign(s) of the times

I have, if I say so myself, a fairly keen eye for detail. I think it probably comes from doing a lot of work, over the years, in Presentation departments, where you're just in the habit of double and triple-checking details like Tape Numbers, Spool Numbers and the spelling and punctuation of captions.
This has served me well, but it can also be a bit of a curse. It's the signs, you see. The shop and office signs with glaring errors. Spot one somewhere on one of your regular routes and it starts to haunt you. Needling away at you every time you pass by.
What I don't understand is this: professionally made signs are fairly expensive. Wouldn't you, if you were commissioning something like a sign, ask someone to cast a second pair of eyes over the artwork?
Here in Soho, a couple of years back, a little coffee shop opened, under the sign (beautifully made in custom-moulded plastic) La Petit Cafe. The business quickly attracted a stream of visitors. Unfortunately, rather than purchasing coffee, most of them seemed to be coming in to inform the increasingly harassed proprietor that (a) La Petit would have an E on the end, but (b) Cafe is masculine in French so it should be Le anyway. I don't think he could stand anymore of this, so the business folded soon after.
This sign in West London always calls out to me... 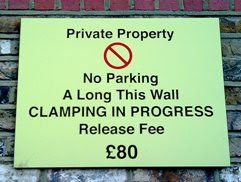 and a recent stay in a Premier Inn revealed this delight... 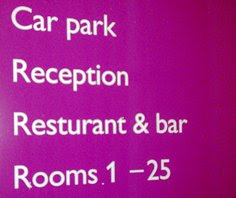 I know, I know, it's not earth-shattering stuff but, mark my words, it represents yet another nail in the coffin of this once glorious Empire. The lid must be quite firmly fixed by now!
Posted by Charles Nove at 10:46

I go on about this sort of stuff all the time but no-one listens to me.

I'm glad I'm not the only one.