I wear a number of hats, in this confusing lark we call life.

And the hat this week (and next) is my Bus Driving one. Regular readers will know that I am one of the chaps behind a small, but beautifully formed, bus company. We operate a little fleet of Routemasters (the famous London double-decker) doing transport for parties and weddings in and around London.

Around London. So, why is it that I am currently guiding one of our buses round the far South West of England?

It's like this. We were approached by Wedding TV, (Sky channel 266) looking for a bus for their pioneering new game show Brides on a Bus. It sounded like fun, and I fancied an adventure, so ... what better excuse do you need? 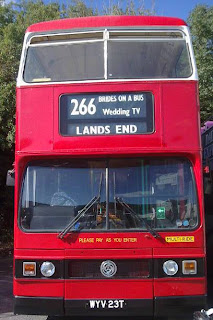 Here's the bus, snapped this morning in Penzance. Not a Routemaster, the keen-eyed observer may spot. This is the only non-Routemaster of our fleet. Also the young upstart of the band. The RMs are 40 years old, whereas this fine example of the Leyland Titan range, turned 30 this year. We're using this for the job because it's a little faster and quieter than the Routemasters, and it has doors, making it a little cosier if the weather decides to turn wintry.

There's a long journey ahead, starting at Land's End tomorrow, and winding up in Gretna Green, just over the Scottish border, on 1st October. Will we make it? Watch this space!

Coming over the brow of the last big hill before Penzance was a lovely experience today. The sun was beating down on the bay, and the English coast was looking very good. I swear I felt a little surge of excitement from my red steed, as she glimpsed the seaside. It's a long way for a London bus to come. I hope she packed her bucket and spade.

And me? Well, cruising the highways at a top speed of 45mph affords time for thought, and sightseeing. I was held up in a queue of traffic passing Stonehenge. I thought it was being caused by people slowing down to look at the stones, but then realised that, in fact, they were slowing down to gawp at a field on the other side of the road, a couple of hundred yards along, full of pigs, lounging in big muddy pools. They looked blissfully happy, their top halves warmed by the sun, their nethers cooled by the water and mud. Happy as a pig in ... er...mud.

Managed to confuse a waiter in a roadside dining emporium somewhere near Exeter, by ordering Vegetable Soup, followed by Roast Chicken. "Do you want the soup as a starter?" he asked. I spent much of the following hour or two pondering what else he thought I might have wanted to do with it. A bodyscrub? A footbath?

More reports to follow as this strange saga unfolds. Tomorrow, the Brides board the bus. Wish me luck!

I think soup is regarded as a side order in such dining establishments...

Safe driving, and cut up some BMWs along the way.

What a fantastic trip - looking foward to reading your blog.