View from the Bridge

The wonderful world of Voice-over takes you to all sorts of places. Here are a couple of my favourite views, starting with the outlook from Voice-of-God corner: 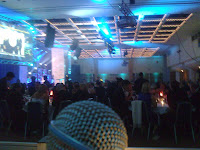 Glamorously located behind a makeshift fence in a darkened corner of the function suite of a top London hotel, poised to announce the names of the nominees, losers and winners at a business awards ceremony. I love doing this sort of work. There's always a great buzz about it. You're a small cog in an extensive machine, working with a highly skilled team who descend on one of these rather anonymous function rooms and, in just a few hours, transform it with set, lights and theatrical magic, into a vibrant venue fit to host an exciting show.

"Voice of God" has become the industry term for my role. It's not my preferred expression, since I don't suffer from delusions of deity (well, only sometimes...). So, what to call it? Announcer seems a bit stiff and formal. Gob on a Stick, some say, but that sounds somewhat unsavoury. Actually, I've yet to find a description better than that coined by my former Radio 2 colleague, the late, and much missed, Ray Moore. "Coughing and barking in the undergrowth" he used to call it. The undergrowth being the decorative potted palms behind which the voice artiste is normally concealed as he barks out his sporadic bursts of unbridled vocal enthusiasm.

And here's another nice place to be. The voice-over booth at National Lottery HQ. The regular occupant is my esteemed colleague Alan Dedicoat, the Lottery's Voice of the Balls. When Alan is on holiday, or otherwise indisposed, it's time to draft in his stunt double ... yours truly! It's a trifle daunting, because Alan is very good and never gets it wrong. But it's live broadcasting, which is my great delight. The trickiest bit is being sure whether the ball tumbling out of the machine is a 6 or a 9. When they are sitting still, it's perfectly obvious, but add a bit of a spin and some sheen from the studio lighting and it can become confusing. There's always that slight nagging fear that I'll become the Voice of the Balls-Up but, so far, we've always got away with it!
Posted by Charles Nove at 07:43