Off on a bit of an adventure now. It's time for the TOGS' Voyage. (If you're new to the concept of TOGS, see my earlier posting on the subject, or listen to Terry Wogan on Radio 2!) In a new and daring venture, some 300 of our loyal listeners have booked themselves on Cunard's latest cruise giant, the Queen Victoria. Their voyage takes them around Ancient Wonders of the Mediterranean and it's my pleasure to be able to join them for the first few days of this exciting outing. We sailed tonight from the port of Piraeus, near Athens. This giant of a ship slipped her moorings and edged out of the harbour so smoothly and quietly that it took a moment or two to be really sure she was actually moving. In a trice, the memory of a drizzly London was erased, to be replaced by.....a torrential downpour in Piraeus! But at least you get a better class of thunderstorm in Greece.
As soon as we were under way, a champagne reception kicked off the TOGS' Voyage in style. We saluted the TOGS and their great achievements in fund raising for the Children in Need charity. And now, at the end of a long and arduous (Don't you mean "drink laden"? Ed.) day, I've now retired to my Stateroom to write these words and, perchance, to dream. Tomorrow is another day, this time in the port of Volos. Assuming, that is, that the ship safely navigates what looks to me like quite a tight path through the various small islands that punctuate the Aegean Sea. It is very dark out there. But I'm sure these guys know what they're doing... Don't they?

Volos has a Monastery, and tomorrow we're going to visit it. Very strict dress code, apparently. Women must wear skirts. Not above the knee. Trousers are right out, it seems. Questions come to mind: What's wrong with trousers? Will the monks be inspecting the skirts for suitability? If yes, how do they avoid studying too closely and giving the wrong impression? Will one particular monk be in overall command of the skirt regime? If yes, will he be called Brother Skirtchecker? One thing is for sure. My journalistic instinct will come to the fore and I shall doggedly pursue answers to these questions and more. Further reports will follow. Probably from a police cell, or possibly the British Consulate.
Avast Behind!
Pictures below:
Voyage planning with Alan Dedicoat ... and yours truly on the majestic grand staircase 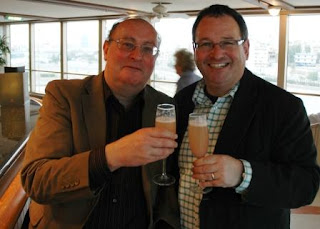 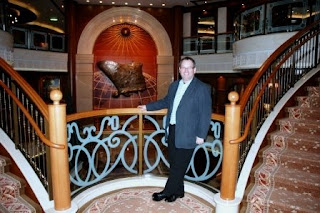 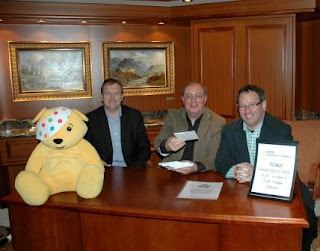