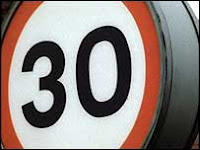 An anniversary for me this week. 30 years since my first paid employment as a broadcaster. It was this week in November 1978 that BBC Scotland were bold enough to take me on, as the youngest staff presenter the BBC had ever booked. In fact, they were so dubious about the whole thing that they had to send off to London for permission to give the job to such a callow youth. While they waited for the BBC equivalent of the Vatican's white smoke, they fiddled the issue and put me on a temporary Engineering grade. All was soon sorted, though.
So, 30 years of professional rabbiting, muttering, shouting and rambling on British radio and television. What fun, and what a privilege! And what changing times, not least in the technology of it all. From playing vinyl records, tapes and cartridges in radio, 2-inch and 1-inch video and even telecine in TV, to the era in which a hard-disk playout server seems to be the source of everything. It mostly whirrs along quite nicely, but there's not so much to get excited about when the equipment you're battling with is an inscrutable black box in a chilled server room at the other end of the building!
Anyway, enough Luddite rumbling from me for now. I hereby wish myself a happy Pearl anniversary. Send gifts of suitable jewellery to the usual address.
Posted by Charles Nove at 09:52