Needless to say, I'm far too cool to give the proverbial stuff about what anyone thinks, so I waited all of two nano-seconds before lunging for a copy of the rag to check if I was on the list.

And .... relax....
'Get your good suit and tie on, and a quick dab in make-up. Make yourself comfy and here comes the Six O'Clock News, all written nicely and clearly before your eyes.' continues Sir Tel.
'Read it clearly and distinctly, ask the reporter the questions you have written down in front of you and there!'

Phew! He's having a go at the TV newsreaders. That's a relief. On radio, we have a much tougher time of it. No make-up, for a start!

Wogan's swipe is, of course, a deftly timed release from his forthcoming book.

Is TV newsreading really that easy? Actually, I don't think it is. Is it watchable? Er....no, not really, most of the time, not in my house. I find I can only tolerate a few moments of TV News before the mechanics of it start to drive me nuts.

Anyway, thanks to the wonders of YouTube, here's a clip of a TV Newsreader in trying circumstances, complete with the gallery talkback, some or all of which will have been blasting into the newsreader's ear as she ploughed bravely on.

And back in the land of Radio, here's a gratuitous pic
(photo by Barry Norman, (c) The Sunday Post)
of me and Sir Tel discussing the merits of some finely turned prose 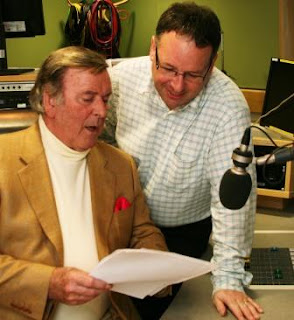 Or perhaps (more likely?) we're discussing a piece of cake...!

I wish Bridlington did have a university.