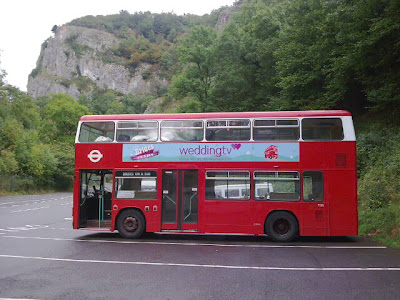 Here we are in Cheddar Gorge. And just to prove the old theory that you wait ages for a London bus and then two turn up at once .... no sooner had I arrived here than another Leyland Titan appeared. It's a local resident nowadays, doing tours around the hills. So my T23 and Cheddar's T860 have renewed their acquaintance, heaven knows how many years after they left London service.

Monday went very well, until we had an unfortunate breakdown on the way to our overnight hotel. Total loss of gears, right in the middle of a major roundabout in Devon. Not good! The Brides and the crew had to be offloaded onto a coach, and I stayed with the bus, the Highways Agency and Devon & Cornwall Police until recovery could be arranged. Both the HA and the Police were very good humoured and supportive, which was a great help in a stressful situation.

Bizarre coincidence: Talking to one of the Highways Agency team, the subject of our hotel for the night arose. I told him it was the historic Boringdon Hall in Plympton. He laughed and said (think broad Devonian accent) "Ahhh, don't let them put you in room 11 .... ahaaaarr!". "Er why?" said I. "They say it's haaauunted!". Turned out that, before going on the Highways, this man had been a night shift manager there and had seen many a scared guest. Great hotel (and no I wasn't in Room 11!). Apparently Henry VIII stayed there. I'm not surprised. I couldn't find the exit either.

Bizarre apparition: Picture the scene. Bus stranded mid roundabout. It's a huge roundabout, in the middle of nowhere, no buildings, no nothing, with a central island about the size of a football field. The scene is lit up by Highways Agency floodlamps, flashing amber beacons, there are cones, blue and red strobes on the police car, it's like a film set. I'm standing in the middle of it all, discussing tactics with the police, when a man appears. Nobody sees him approaching - he's just, suddenly, there. It's a chilly night, but he's wearing an oily string vest and comedy baggy trousers. He looks exactly like the binman that Geoffrey Hughes used to play in Coronation Street. He walks up to the cops and says "Excuse me. Could I have a word with you?" They look slightly apprehensive. Turns out he has a fairly technical enquiry about the legality of transporting a particular type of hazardous waste in his vehicle. One of the policemen spent half an hour or so obtaining the info he needed by radio. Then, as quickly as he arrived, he'd gone. There were 5 of us standing there, and not one of us had seen him arrive. Nobody was quite sure which way he went when he left, either. Weird!

The broken down bus was recovered to Launceston, where I rejoined it in the morning to do some fault finding. With my trusty test meter, and some invaluable advice on the phone from one of our chums who used to be a London Transport electrician, working on these buses, I traced the fault. It was a humble broken wire, in the circuit controlling the alternator. Without it, the alternator could not charge the batteries, and without charge the batteries reach a point where they can no longer operate the gearbox....hence loss of gears. Wire fixed, bus back on the road!

My party had carried on without me, using a hired coach. I made it to the hotel in Devon while they were still out filming, so there was a big cheer when they arrived at the hotel to find the Titan already ensconced in the car park, with me lounging against it in a "what kept you?" pose.

Off to Frome in Somerset tonight. Some nice local Cider, perchance....?
Posted by Charles Nove at 15:42

Well, from personal experience - if you are going to break down, might as well make it a good one!
Glad to hear you are back on the road again...